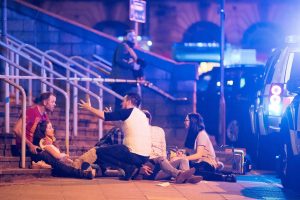 As I sat there watching the news reports pour in from Manchester, my mind drifted to the question: “How long?” I’ve known for many years that the United States is primed for this exact type of attack at a public event.  With each similar incident around the world, “when” comes closer and closer.  Living in a free society makes certain things inevitable, and vulnerability is one of them.  There is much to talk about on how humanity finds itself in a time when massive and random killing is a political or ideological action, but that is a much larger question.

Let’s be clear that there is no stopping someone that wants to inflict harm on others.  The nature of public events places them at significant risk, and those attending or working in these environments are also at risk. Public events are the ultimate soft target.  As I reflect on this threat and wonder what I can do to protect better those I am charged with, there is the elephant in the room.  The U.K. and Europe, in general, provide public event security much better than we do in the U.S.  I’ve experienced event staff around the world, and we just don’t stack up at home.  You hear whispers in the entertainment industry, but very few speak in the stark terms of what is the reality of many American venues.  Sure, there are some here that do it as well as anyone in the world, but there are others that operate on mediocrity and the fringes of functionality.

In other parts of the world, private security commands much the same respect as law enforcement.  They are seen as an asset, not a hindrance. It is a better-paying job, with more training and a higher caliber of people seeking the positions.

As will always be in a capitalistic society, the bottom line matters.  This invades every aspect of a live event, from booking to production to cleaning to security.  Event security has gone through a metamorphosis in the last 20 years in the States.  While the threats have increased, event security companies and in-house security have become an amalgamation of many non-security positions within the venue.  Private companies saw the opportunity to have many staff working at an event. They morphed into ticket-taking and ushering contractors, and then parking and cleaning providers. Soon, instead of having 100 people working actual security positions, they had 500-600 people working a myriad of “staffing” positions.  For building and venue managers it was easier to have one company administrate this vast number of staff, and it became the norm.  The lines became blurred and faced with a deficit in one area, say security, it was easy to move someone from the ushering staff to a security position. Sure, they have some knowledge of the building, but never intended to become a protector of events.  Wages have stagnated for private security and in many places hover at or near minimum wage.

This puts the U.S. at a greater disadvantage when it comes to protecting scores of people in public places.  Training curricula are outdated and mostly focused on industrial security.  There is a minimal focus on the environment these people often work in—the stadiums, arenas, and other performance venues. The local security is supplemented by police officers, mostly working off duty.  This is something that we excel in, using police officers as public safety in larger events, but then it’s always reactionary to worst-case scenarios.  These triggers when event stakeholders “increase security” are often too little too late.

There are many reasons our unpreparedness exists, and I will talk more about these going forward.  Recognizing the problem before something happens is the key to changing things.  Unfortunately, as I have said for years, it is only a matter of time before a Manchester-style attack is attempted in the United States.  The question will be asked: Were we ready? Unequivocally, we are not.